Why you need a fresh perspective and how to get one

Find out how to delve deeper, hack your thinking, and set aims you can be proud of.

Ever since I was a kid I've noticed this weird thing that happens when I introduce myself to someone.

At which point they'll say something like: "Oh cool. Nice to meet you Michael."

You get the picture...

Thing is, I could never understand why this always seemed to happen. Was my voice too quiet? Was there something wrong with the way I was pronouncing my name? Perhaps I hadn't enunciated the syllables correctly?

Of course, eventually I came to realise the problem wasn't my speech or some kind of shared hearing impairment among the tens of people who'd misnamed me. It's simply that Michael is just a far more familiar name.

And whenever we encounter something new, unfamiliar, we have a tendency to distort it, unknowingly, in order to make it fit within the parameters of what we've already experienced, what we're already used to.

In language they call this 'L1 interference'; the way a person's first language can interfere with their ability to learn a second.

In fact, studies have found that learning, in general, becomes more difficult as we age not because we have trouble absorbing new information, but because we struggle to let go of the old.

One researcher likened it to “writing on a blank piece of white paper versus a newspaper page.” The difference “is not how dark the pen is, but that the newspaper already has writing on it.”

In other words, the capacity to learn new things is directly connected to the willingness to hold loosely to, or let go altogether, old ‘news’.

It’s the ability to discard the past that allows you to embrace and invent the future.

And this isn’t just true of cognitive experiences, but professional and even personal ones; which begs a few questions...

What might you be holding on to that you'd be better letting go of?

What past experiences, ideas or belief systems might be holding you back?

“An essential first step in being creative is to question your own way of looking at things.” - Sir Ken Robinson

We've been taught to believe we must work harder and longer to get the best from ourselves, yet science shows this isn't true.

We don't achieve better results or even get more done by working harder and longer, but rather through working smarter.

But what exactly does this 'smart' approach look like? How and why does it work?

Learning the answers will require a fresh perspective and an open mind. But, don't worry. The road to discovering this better way to work isn't as hard as you think. Your goals are nearer than you know.

But we must be clear. To accomplish new aims we must step beyond old habits. And, as you'll discover, that's what this edition of the Academy is all about. 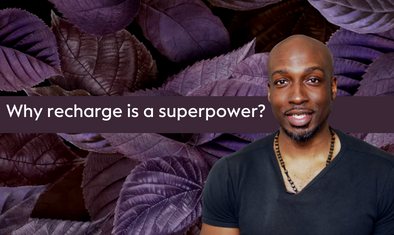 Why learning to recharge is a superpower

Discover how to prime your brain for peak productivity, and why learning to recharge is a superpower.

More in this Academy Edition

Why you need a fresh perspective and how to get one

Find out how to delve deeper, hack your thinking, and set aims you can be proud of.

Why learning to recharge is a superpower

Discover how to prime your brain for peak productivity, and why learning to recharge is a superpower.

How to avoid brain fog and stay mentally fresh

How do I improve focus?

What exactly is rest, and why does it matter?

How to love your brain and boost your work

Learn how to hack your daily patterns to build the work habits you need.

Three ways to kill distraction and reach your goals

Find out how to short circuit the distraction loop and get more done, more easily.